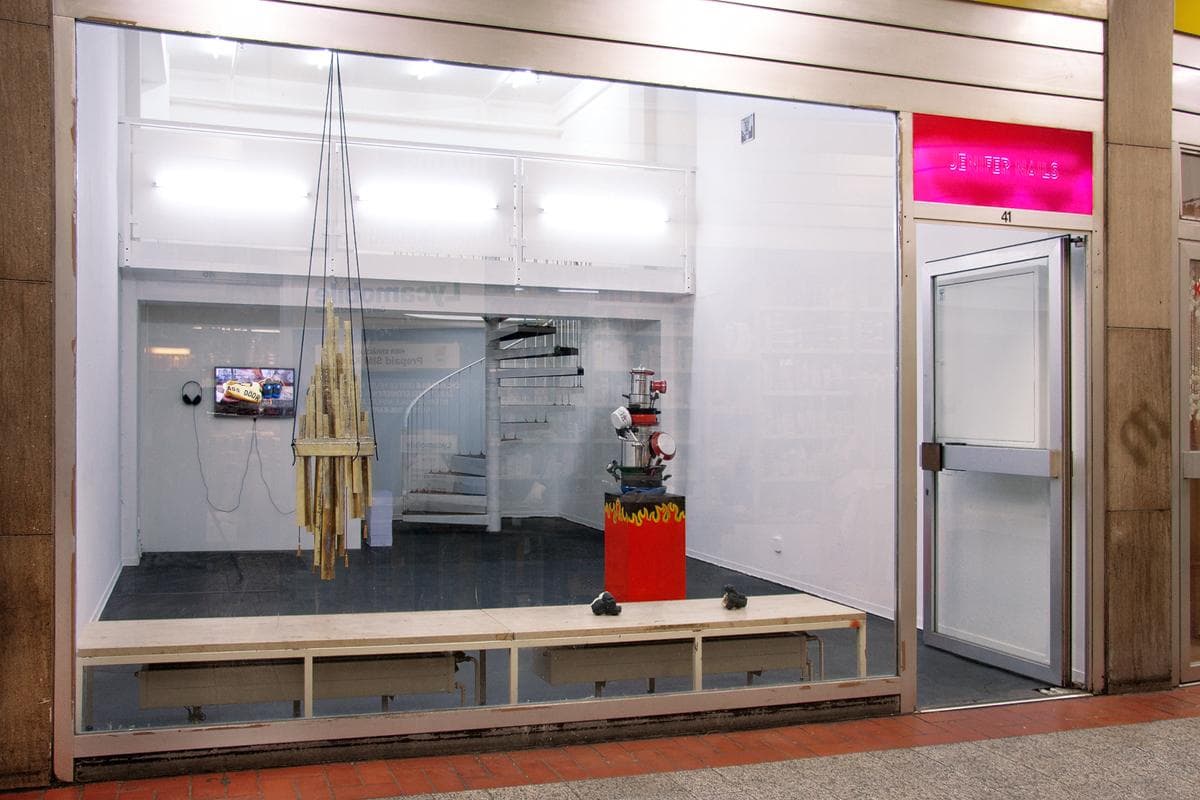 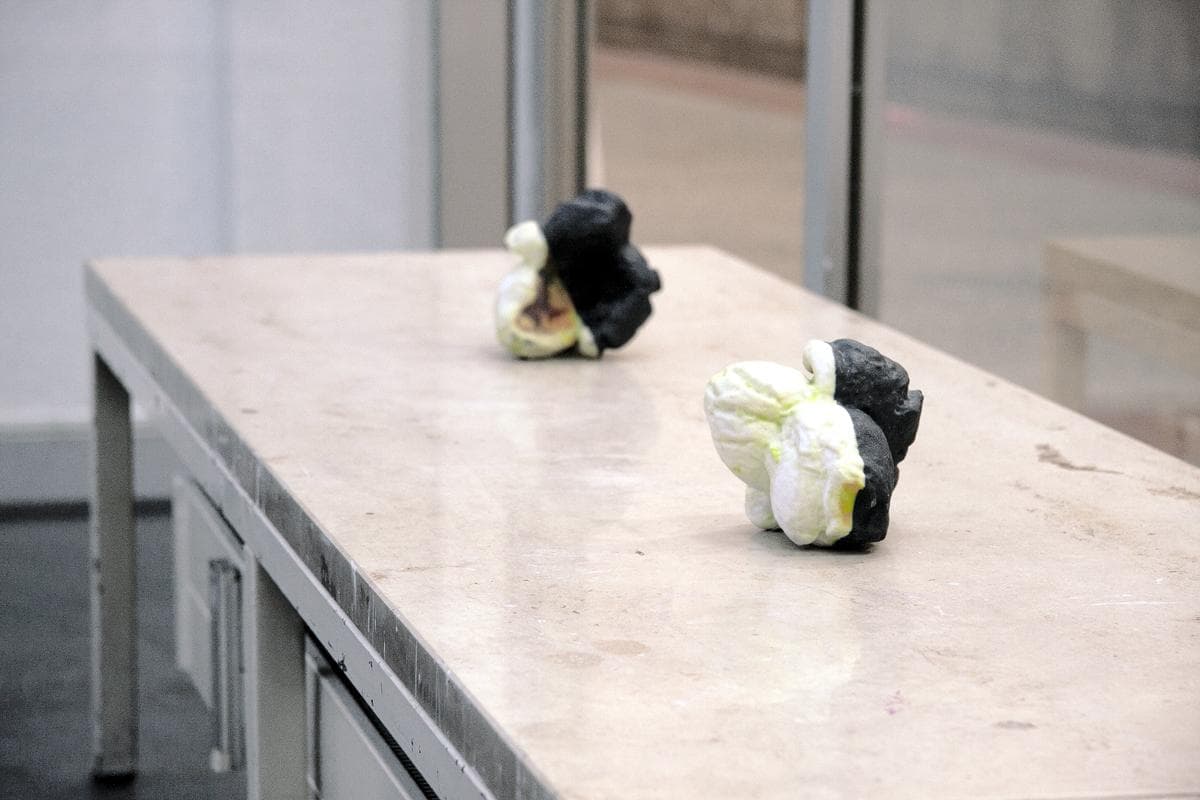 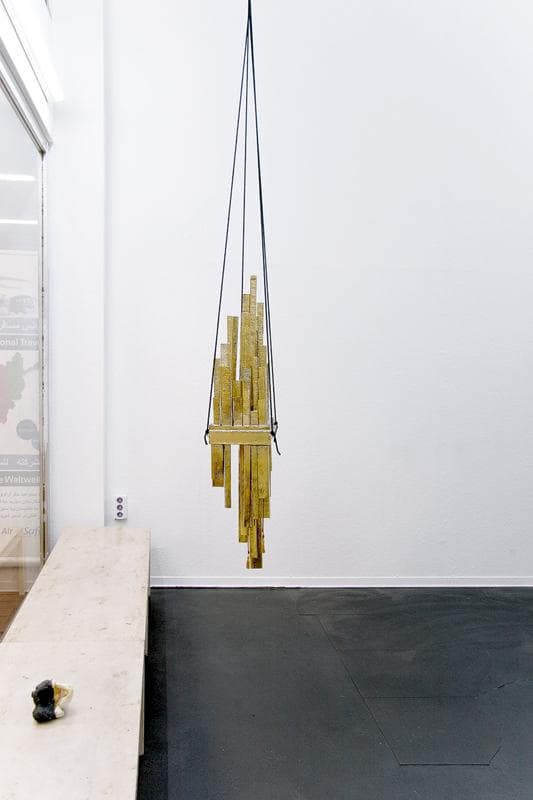 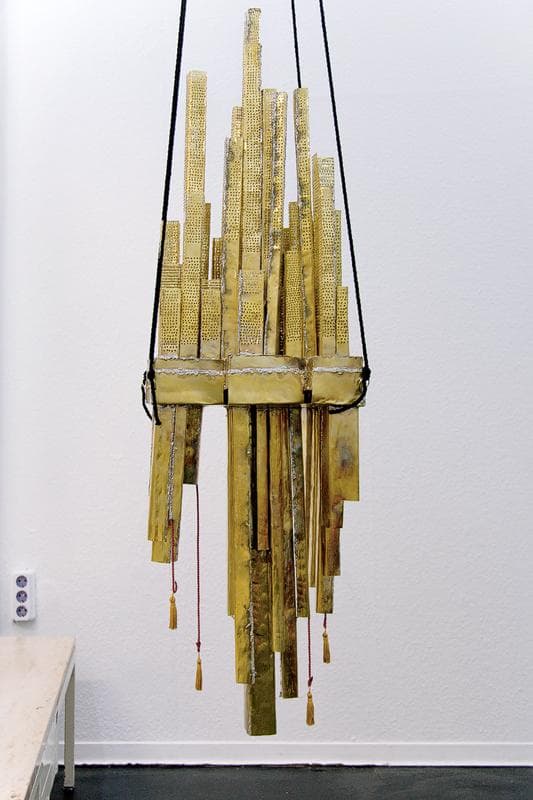 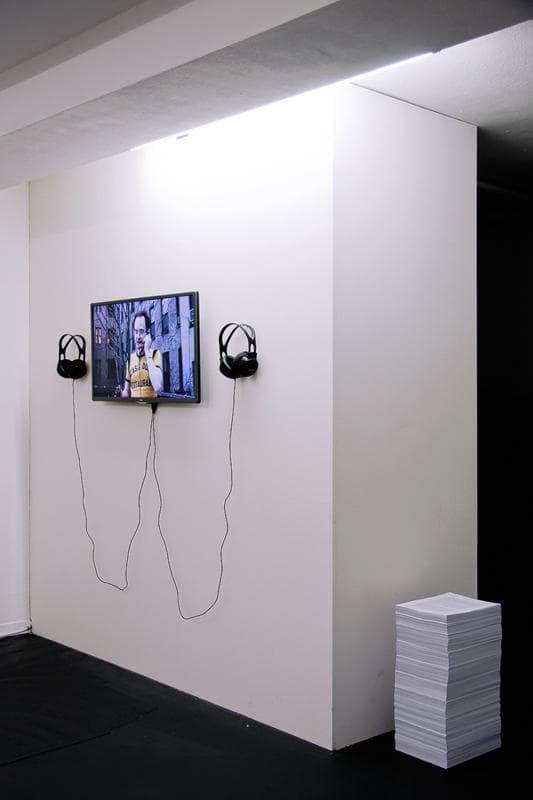 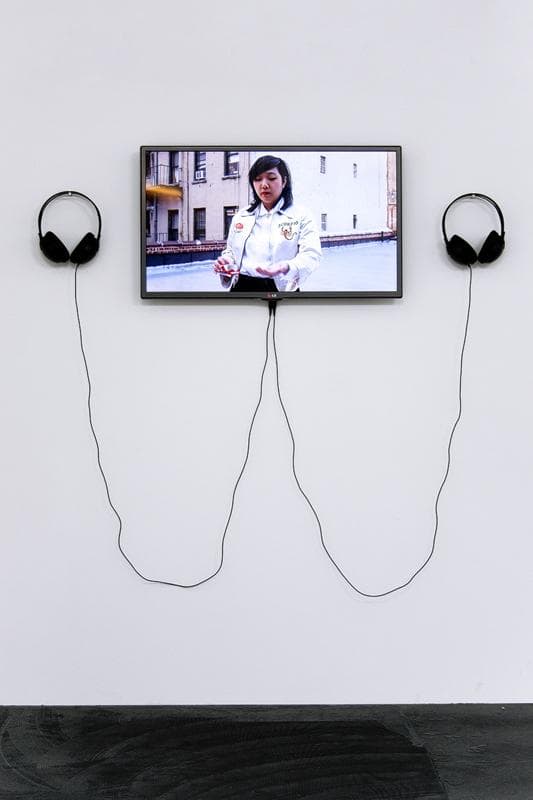 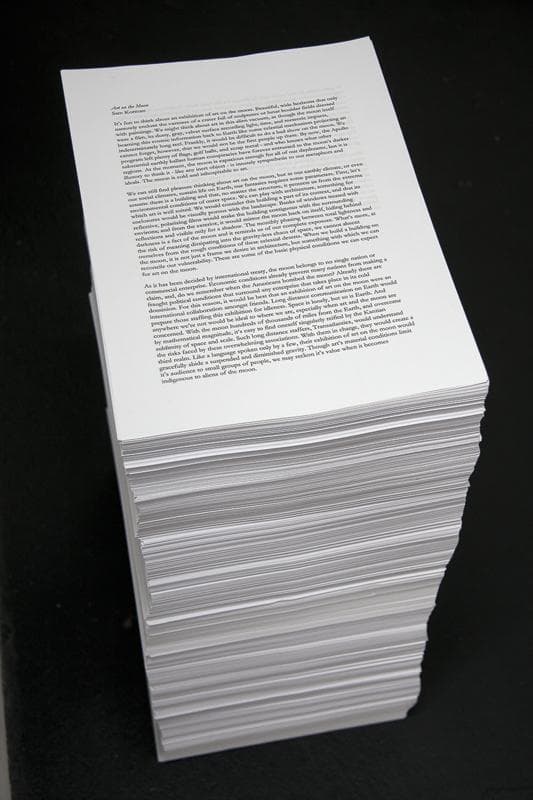 Sam Korman
Art on the Moon, 2015
exhibition text on paper 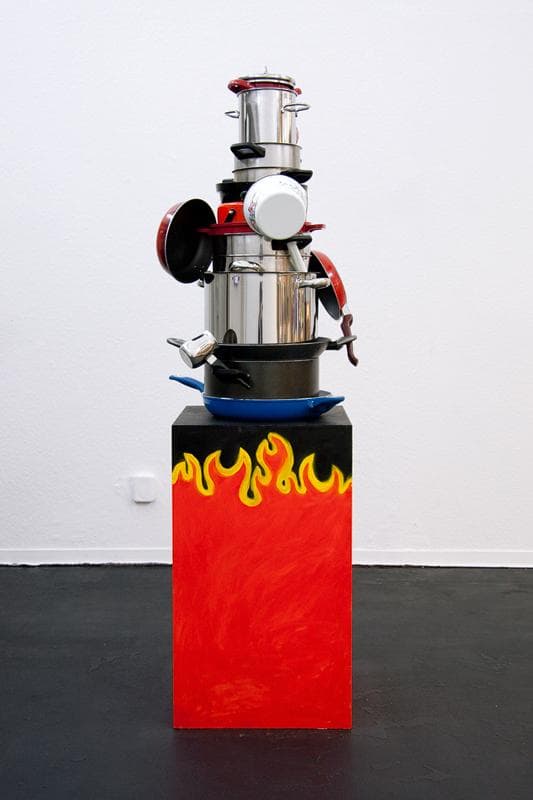 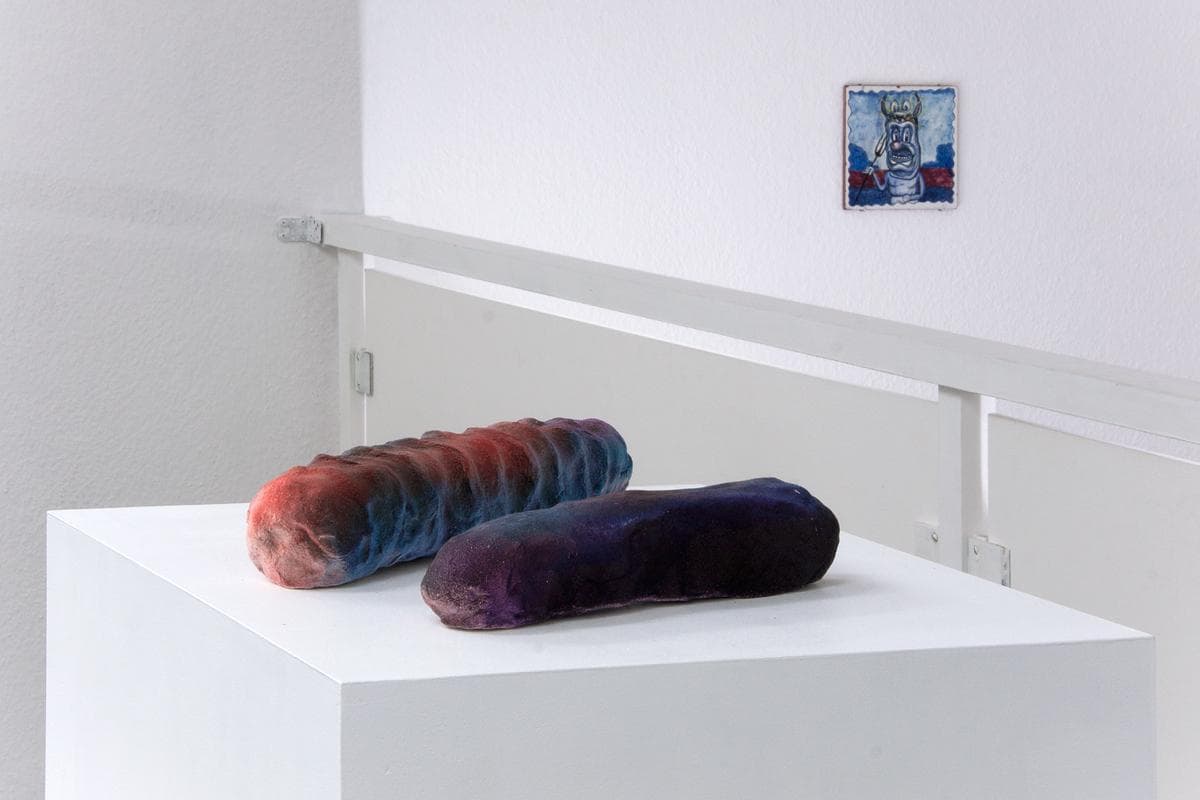 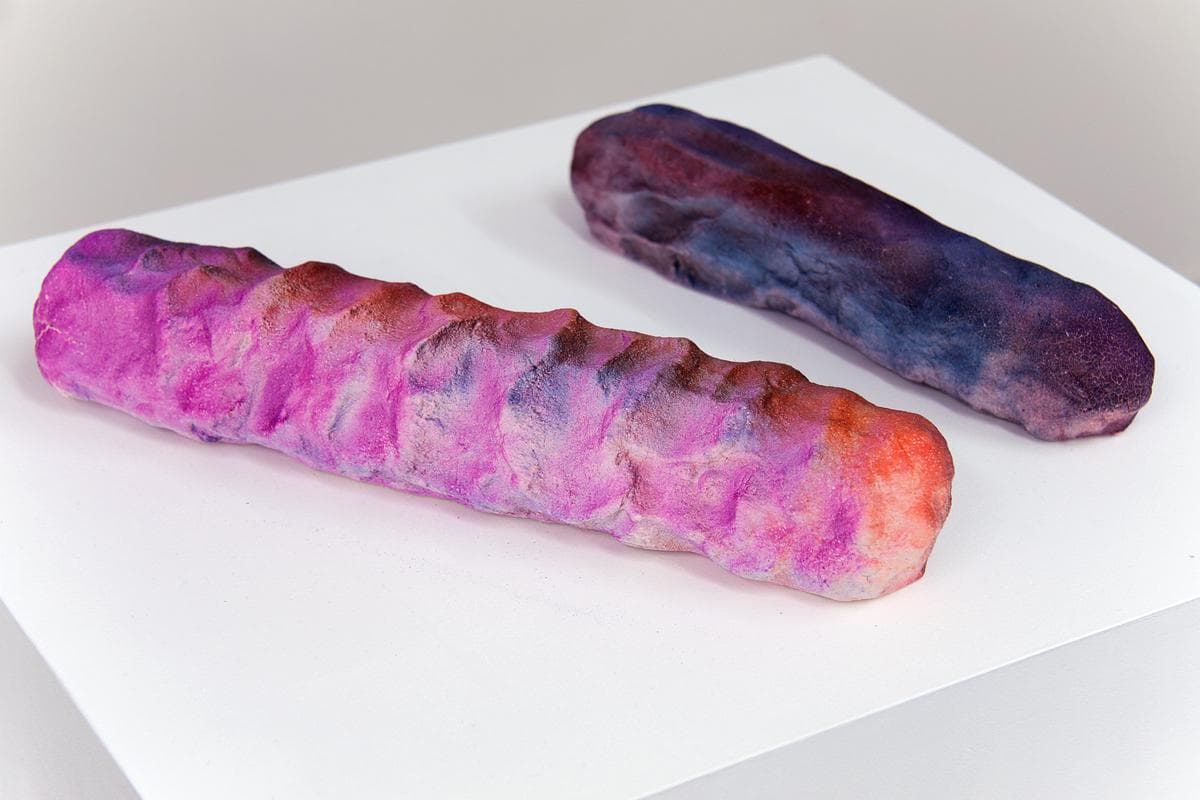 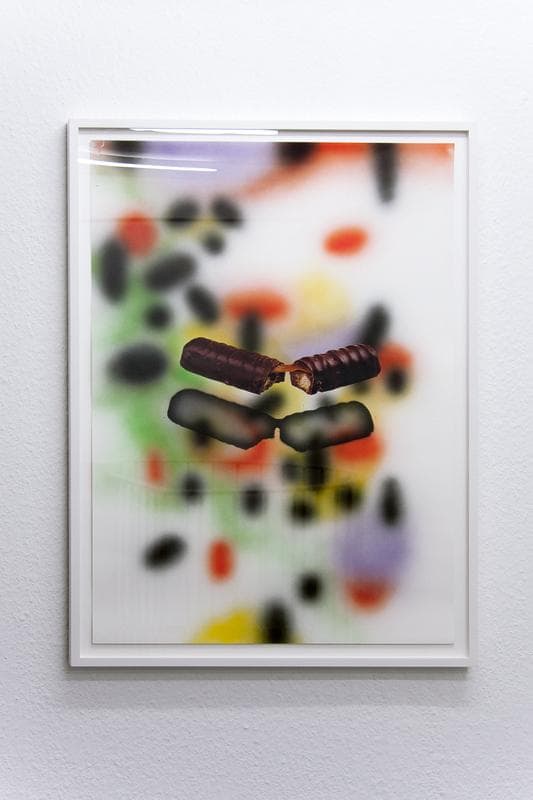 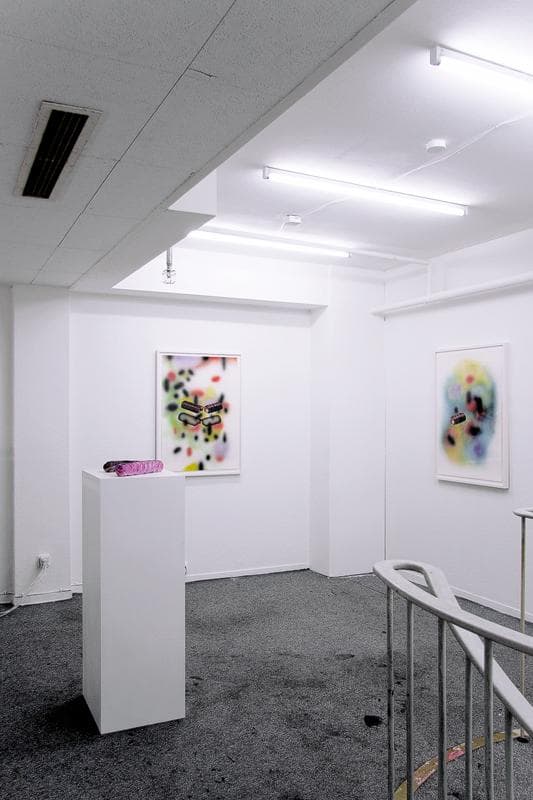 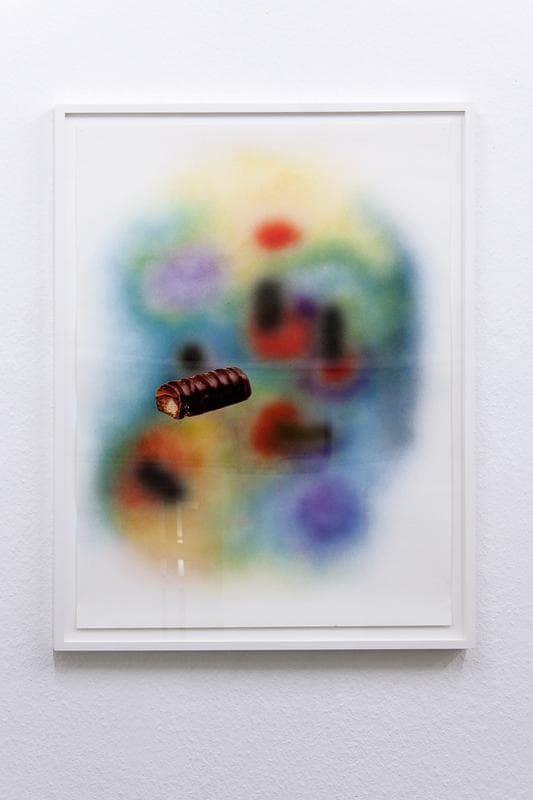 Art On The Moon


It’s fun to think about an exhibition of art on the moon. Beautiful, wide horizons that only narrowly enclose the vastness of a crater full of sculptures or lunar boulder fields dressed with paintings. We might think about art in this alien vacuum, as though the moon itself were a film, its dusty, gray, velvet surface recording light, time, and meteoric impacts, beaming this cosmic information back to Earth like some celestial mechanism projecting an indeterminately long reel. Frankly, it would be difficult to do a bad show on the moon. We cannot forget, however, that we would not be the first people up there. By now, the Apollo program left plenty of flags, golf balls, and scrap metal - and who knows what other substantial earthly ballast human conspiracies have forever entrusted to the moon’s darker regions. At the moment, the moon is capacious enough for all of our daydreams, but it is illusory to think it - like any inert object - is innately sympathetic to our metaphors and ideals. The moon is cold and inhospitable to art.

We can still find pleasure thinking about art on the moon, but as our earthly climate, or even our social climates, sustain life on Earth, our fantasies requires some parameters. First, let’s assume there is a building and that, no matter the structure, it protects us from the extreme environmental conditions of outer space. We can play with architecture, something for which art is well suited. We would consider this building a part of its context, and that its enclosures would be visually porous with the landscape. Banks of windows treated with reflective, polarizing films would make the building contiguous with the surrounding environs; and from the exterior, it would mirror the moon back on itself, hiding behind reflections and visible only for a shadow. The monthly phasing between total lightness and darkness is a fact of the moon and it reminds us of our complete exposure. What’s more, at the risk of meaning dissipating into the gravity-less chaos of space, we cannot absent ourselves from the rough conditions of these celestial deserts. When we build a building on the moon, it is not just a frame we desire in architecture, but something with which we can reconcile our vulnerability. These are some of the basic physical conditions we can expect for art on the moon.

As it has been decided by international treaty, the moon belongs to no single nation or commercial enterprise. Economic conditions already prevent many nations from making a claim, and, do we remember when the Americans bombed the moon? Already there are fraught political conditions that surround any enterprise that takes place in its cold dominion. For this reason, it would be best that an exhibition of art on the moon were an international collaboration amongst friends. Long distance communication on Earth would prepare those staffing this exhibition for idleness. Space is lonely, but so is Earth. And anywhere we’re not would be ideal to where we are, especially when art and the moon are concerned. With the moon hundreds of thousands of miles from the Earth, and overcome by mathematical magnitude, it’s easy to find oneself singularly reified by the Kantian sublimity of space and scale. Such long distance staffers, Transatlantics, would understand the risks faced by these overwhelming associations. With them in charge, they would create a third realm. Like a language spoken only by a few, their exhibition of art on the moon would gracefully abide a suspended and diminished gravity. Though art’s material conditions limit it’s audience to small groups of people, we may reckon it’s value when it becomes indigenous to aliens of the moon.

At some point, art and artists must be chosen for the lunar show. In this case, we would suggest a selection: some friends, a student, someone from our hometowns, and a few artists with whom we’ve gained an intimacy through their work. If this exhibition is to represent such interstellar collaboration, then it should exist as odd constellations, equally geometric as perspectival and interpretive. Unprotected from assaults by space debris and the sun, no structure could withstand these conditions for long. It would certainly be a temporary exhibition. What strangeness and alienation, when we speak about distance in terms of time. How violent and chaotic our momentum now appears. But art on the moon might be free to enfold and expropriate this condition, contort and officiate in the abjection of its difference. The irony of this, our impossibly distant, but closest satellite…what pointlessness! And yet, an exhibition, just as the artists it has connected, trusts to art in locating some reason we’ve given passage to the things we brought with us to the moon.

When Challenger exploded, we saw dreams ignite. Maybe we also saw that neither precious things, nor garbage belong in space. Error, in a void so hostile to life, can lead to catastrophe and threat would be embedded in every aspect of an exhibition of art on the moon. It could end with devastation. It is for this reason that art on the moon might have purpose, because all of the banalities and boredom ascribed to any solitary earthly work would bare a peculiar celestial gravity; and, across time and distance, the act of sending art to the moon would be a catharsis of values and emotions so personally held. It is fun to think about an exhibition of art on the moon, because we cannot submit our Transatlantics to this immanent cruelty in person. These reveries, like the distant environs of the moon, may confirm the malice we’re willing to risk for others further contemplation of becoming alien together with art on the moon.